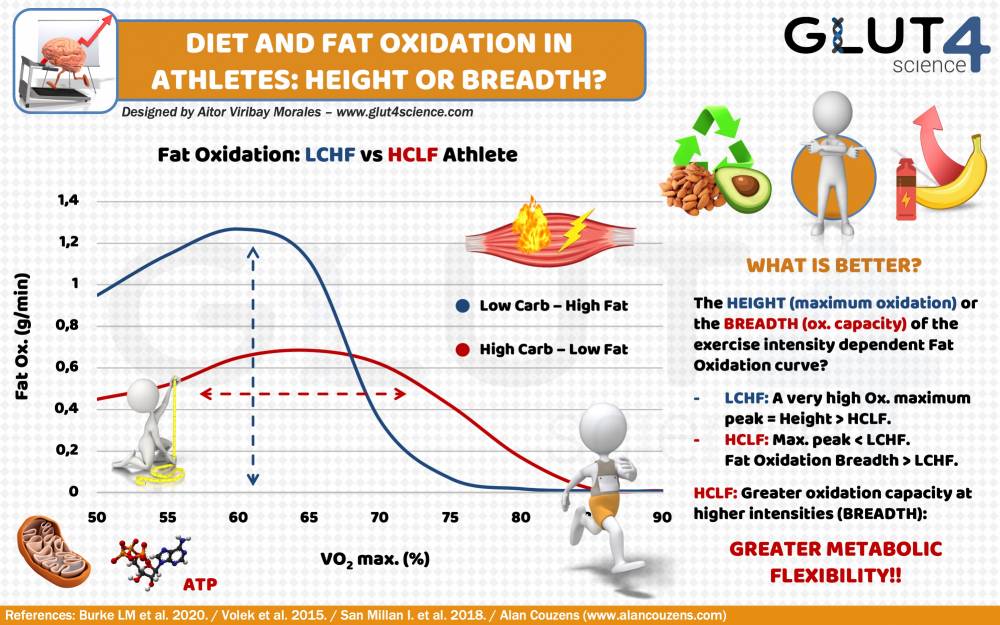 The hottest topic in sport nutrition and physiology field is related to the eternal discussion of which diet could be better, in terms of performance and sustainability, for athletes competing in the best races of the world.

To be honest, we should assume that this is not a fight anymore, but only a scientific dichotomy that is leading us to a better understanding of exercise physiology, metabolism, and nutrition, while giving us the best of each side scientists. Although the reasons and arguments used to defend each tendency are quite different between them, both have a final common goal: to improve athletes´ metabolic efficiency and their capacity to optimize sport performance. And this, my dear lector, can be traduced into improving the so-called, and so much appreciated Metabolic Flexibility.

In this little post, I want to analyze how a chronic diet can impact on athletes Fat Oxidation, in order to understand which diet can be more effective to improve performance in the high-level sport.

First of all, I want to clarify that it all depends on each athlete and sport discipline´s context, so to avoid misunderstandings in my conclusions and arguments, they are going to be focused on professional cycling performance (endurance sport), as this is the field I work in.

Let´s start now analyzing the graphic below (infographic) where you can see a comparative of Fat Oxidation curves between High Fat Low Carbohydrate (HFLC) and High Carbohydrate Low Fat (HCLF) athletes. The curve is based on different data extracted from the currently available literature and my own testing with world tour professional cyclists.

It is well understood that chronic HFLC diets can increase Fat Oxidation to very high rates that can´t be reached with HCLF diets. Interesting data from Volek et al. (2015) showed peak oxidation rates close to 1.54 g/min in ultrarunners (higher fat oxidation rates are supposed while runnnig) adapted to a HFLC diet, which was a 2.3-fold higher than in the HCLF group. Moreover, Prins et al. (2019) registered peak rates of fat oxidation around 1.26 g/min in male athletes (again, runners) after 6 weeks of HFLC diet, which represented a 63% higher than those measured on the HCLF diet group. Similar results were obtained recently by Burke et al. (2017) in the famous Super-Nova project (race walkers), although this work was criticized (unfairly, maybe) because of the short adaptation time to the diet they used (3 weeks).

In this sense, there is one thing that we can conclude clearly from these interesting researches in the field: higher oxidation (peak and mean) rates can be reached with an HFLC diet, comparing with HCLF.

But… is this a positive effect? Is this an advantage to improve performance? Does it mean that HFLC athletes have a greater Metabolic Flexibility? In my opinion, we should look further.

Before continuing we should remember the definition of Metabolic Flexibility. As follows, it´s defined as the capacity to use one substrate or another, depending on the exercise intensity demands. In fact, is the ability to use Fats and Carbohydrates (CHO) as fuels (energy sources) to obtain ATP at different exercise intensities. More clearly: to be the best-using Fats AND CHO, not only Fats OR CHO. And here, my dear lector is the key to everything.

Therefore, we shouldn´t focus only on the Fat Oxidation rates (peak and mean), whose higher values are reached on exercise intensities around 59-64% of VO2 max. depending on different factors as explained here, but also on the ability to use them in a wide range of intensities. Moreover, we shouldn´t forget the importance of athletes´ capacity to use Carbohydrates, especially at higher intensities (>70% VO2 max.), as they (CHO) represent the most efficient fuel when physiological demands are greater. In addition, and knowing that in current sports era, endurance races like marathons or big mountain stages in the Tour de France are completed at high relative intensities (>70% VO2 max.) and decided at >80-85% VO2 max., it could be easy to understand the importance of being able to oxidize Fats and CHO at those relatively high intensities. Actually, these characteristics describe exactly what means having a high Metabolic Flexibility.

At this point, we can already formulate the key question of this post: What it´s more important for reaching a higher Metabolic Flexibility? Fat Oxidation curve´s Height or Breadth? As described in the previous paragraph, if I could choose one, I would choose the latest.

But, what happens, then, with the diet? How it can affect this? As you can see in the graphic below and, in the same way as Alan Couzens described in his post 5 years ago, HFLC athletes usually have a higher Height in the Fat Oxidation curve but, however, the Breadth is shorter. On the other hand, HCLF athletes show lower Height but with a larger Breadth, which gives them a greater capacity to oxidize Fats at higher exercise intensities and, therefore, a better Metabolic Flexibility. Already in classics studies in the first decade of 1900, as well as in those interesting works carried out by Romjin, Coyle et al. (1993) and later by Jeukendrup et al. (2003), among others, it has been demonstrated how athletes that consume diets high in Carbohydrates can reach Fat Oxidation rates up to 0,7-0,8 g/min at 60-65% VO2 max. with high relative values of 0,4-0,5 at 70-77% VO2. More recently, San Millán and Brooks (2018) published an interesting paper where they develop an indirect methodology based on Lactate to assess the Metabolic Flexibility and they also registered similar Fat Oxidation rates than those previously reported in elite-professional endurance athletes.

Moreover, it´s well known that the capacity to use Carbohydrates in higher intensities will always be greater for HCLF athletes, as demonstrated previously in the literature, and representing a clear advantage at race/ competition pace. In line with this, it´s important to point out that when an athlete goes in a Low Carb High Fat diet to reach mentioned high Fat Oxidation peaks, the total amount of dietetic Carbohydrates need to be severely reduced (down to < 50 g/day), limiting as a consequence the Glycogen storage and, therefore, also the CHO oxidation and performance capacity at higher intensities (>70% VO2 max.). This is, actually, the bigger negative effect of HFLC diets.

All in all, although chronic Low Carb High Fat diet can increase the Fat Oxidation rate at moderate intensities comparing with High Carb Low Fat diet, it also can reduce the Metabolic Flexibility (breadth of the curve and CHO oxidation) and, in the same way, compromise the metabolic efficiency or economy and the capacity to perform in higher intensities. Contrary to what expected by the Low Carb supporters, it seems that the LCHF diet doesn’t increase Metabolic Flexibility and neither the metabolic efficiency of competitive high-level athletes like professional cyclists or marathoners.

In conclusion, it´s well known that Fat Oxidation is a key parameter to measure endurance sport performance. Although having a higher peak oxidation rate could be interesting for endurance athletes, it doesn´t mean that they show a great Metabolic Flexibility that, however, it´s represented by the breadth of the oxidation curve and the capacity to use CHO. As HFLC diets seem to be useful tools to increase Fat Oxidation, they don´t seem to be adequate to optimize Metabolic Flexibility and the capacity to oxidize fuels more efficiently.

Considering this, athletes, nutritionists, coaches, physiologists, etc. should know the effects of each diet on metabolism regulation and exercise capacity, to be able to discuss and decide what could be better for different situations objectives and priorities.

Little acknowledgments: I´ve always been really interested in understanding how we (my cyclists and me) can improve Metabolic Flexibility with different nutrition protocols. That´s why this topic has always received a big part of my interest. Some time ago, I read an interesting post on Alan Couzens's website where the Fat Oxidation profiles of different Ironman competitors (with different diets) were analyzed. The inspiration to write this blog comes from there. At the same time, I started to read Iñigo San Millán´s work on Metabolic Flexibility and my curiosity about the topic increased a hundredfold. From that point, I follow my journey doing tests with the professional cyclists I work with and understanding in the field what I read in the literature. I realized then the real importance of Carbohydrates on metabolic adaptations in the high-level performance and, as a consequence, I started to think about new ways to improve their intake. After some years of hard teamwork, our lasts scientific publications in the field of CHO where we proposed higher intakes (120 g/h) that currently recommended, were recently published. You can check our novel conclusions here.

I hope you can find this post useful to understand the differences in Athletes´ Fat Oxidation capacity according to the diet chosen. If so, you can comment on this publication in the site below.

Thank you so much for reading me! See you soon!

If you want to be updated with my latest publications, you can subscribe here to my list. 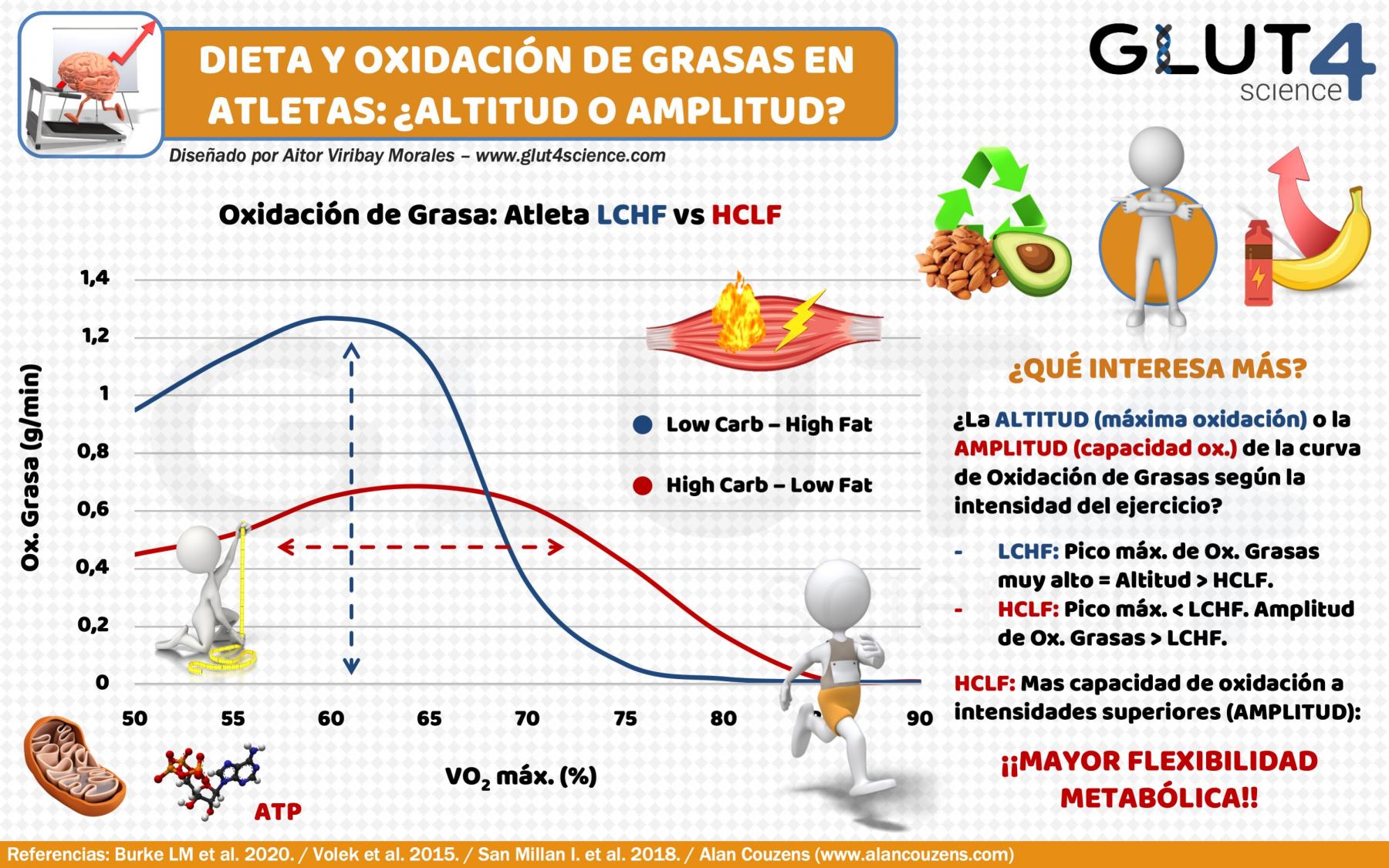 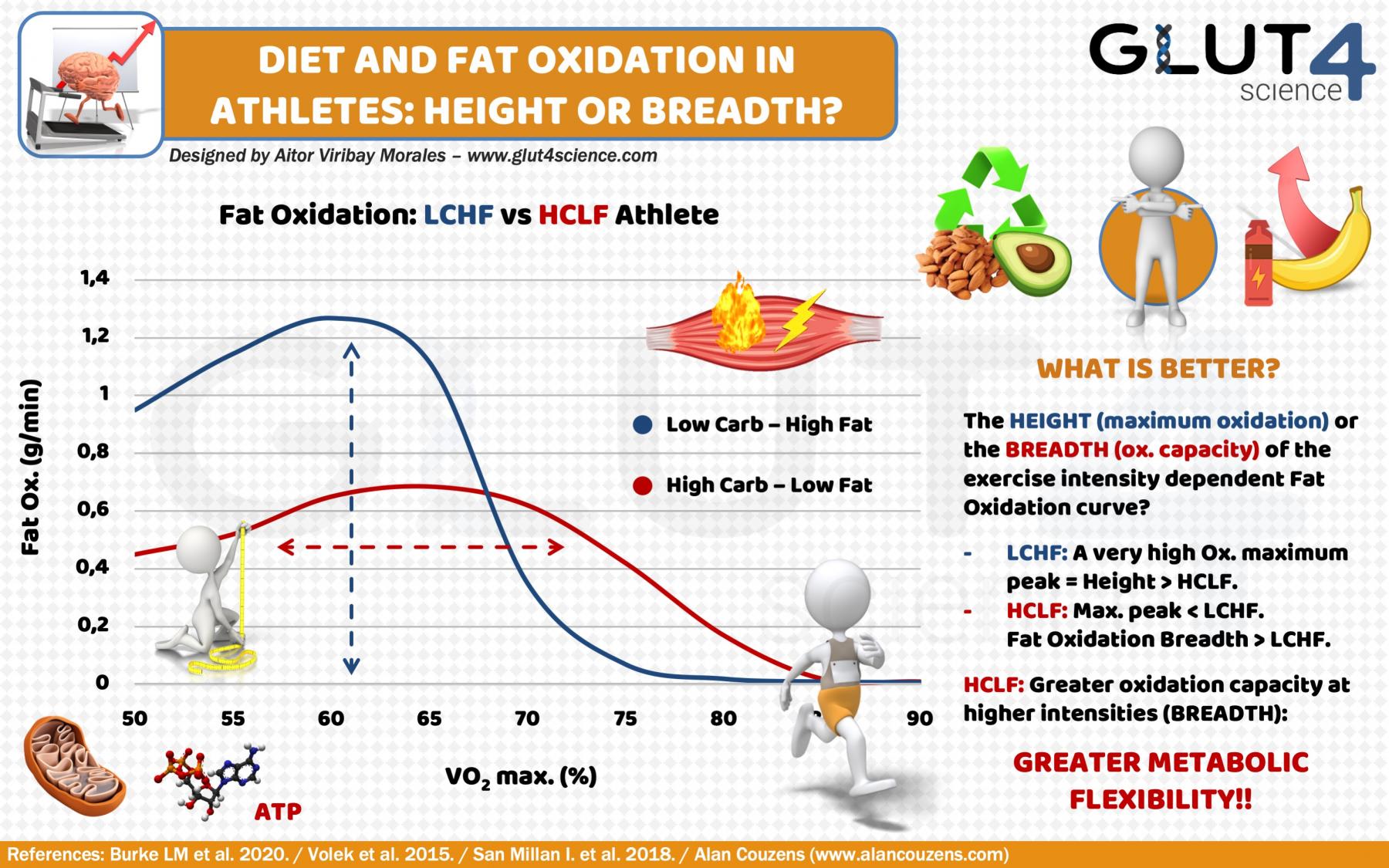 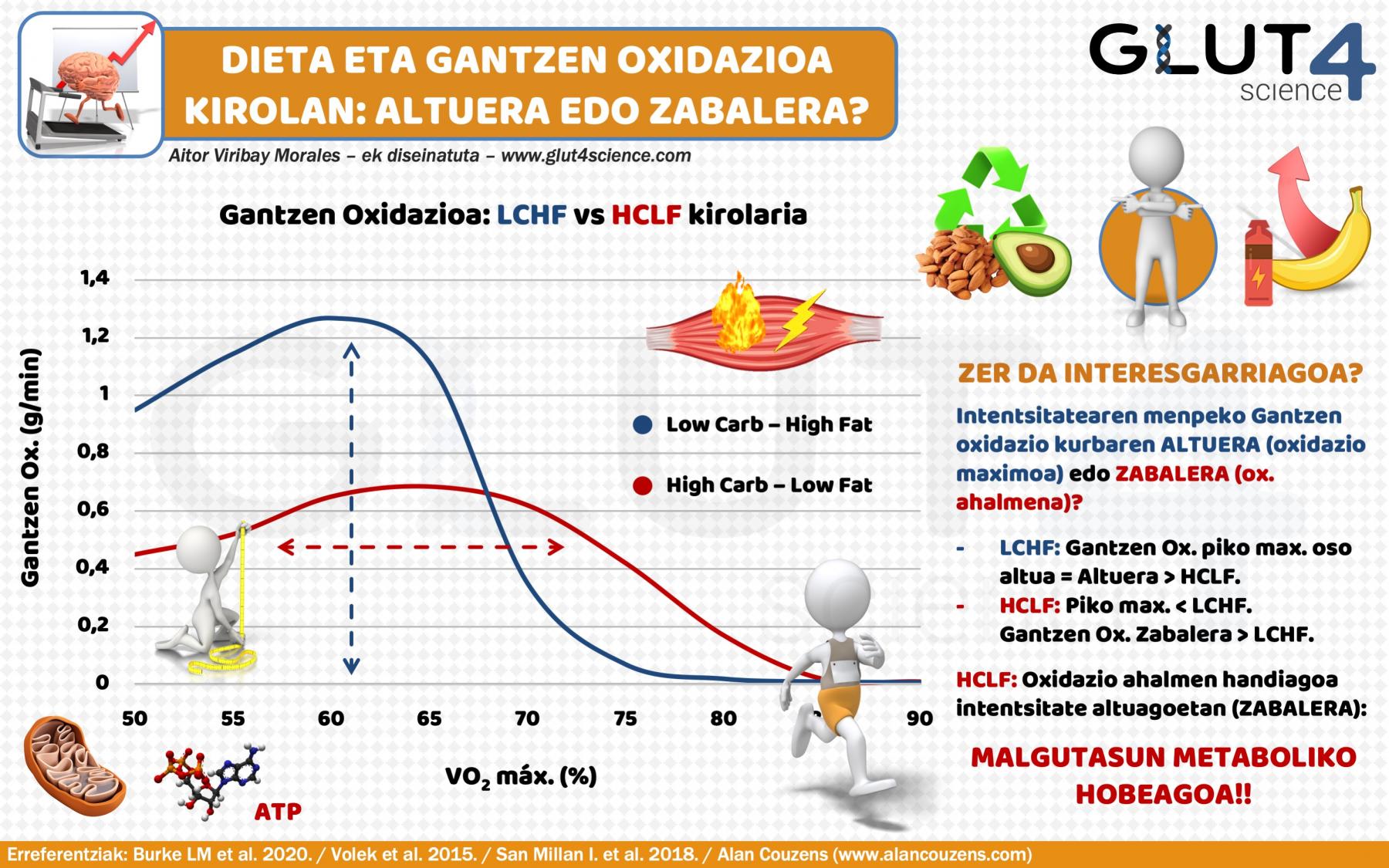